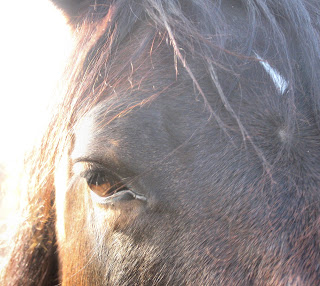 Sometimes the games we play aren't easy to define. I've been incorporating Parelli's Seven Games into everything I do with my herd. The more I stay with the program, the more consistent they are. It works two ways. Yesterday I used the Games for everyone when my friend brought three of her Grandchildren for a Holiday visit.

She spent a lot of time with horses when she was a girl, so she has some horse sense. But her Grandchildren are suburbanites who spend most of their time in fenced in yards and in carefully supervised play time with their friends. Coming out to our place is like going to a National Park. It's big, wide open and yesterday I had the horses OUTSIDE, so there were no fences between them and the horses. It isn't like seeing wild horses, but from their point of view it was just as exciting.

We practiced some simulations before we went out to visit, playing Friendly game, Wax on-Wax off, Porcupine and Driving. It was a diverse group too. The youngest was 3 years old and has Downs Syndrome, the next is 5 and has been out before, so she became the instant expert. And their cousin is 12 years old and quite full of himself, as all healthy 12 year old males are. Grandma is my age and has been a friend for many, many  years. Her children grew up with mine, next door neighbors.

When they all felt confident enough, out we went to bring the horses in for their morning grain. I'd saved that for them to do. It can be so empowering the first time you interact with  horses if it's done right and set up for success. I wanted them all to go home with an exciting story to tell their Mom's and Dad's.

I had things set up so all they had to do was mix the grain, add some carrots and whistle the horses in. I LOVE THE PARELLLI'S! I have to stop here again and say my "Thank you!" for giving me a program I can follow and apply. My horses came in and gave those kids the morning of a lifetime!

The kids did exactly what we'd practiced. They walked out about twenty feet down the path, whistled my three note signal that means "REALLY GOOD THINGS ARE WAITING!" to the herd, cocked over onto their legs and waited.

I swaney. Sometimes I think those horses are psychic! They were way out in the field, so far you couldn't see them because of the hills. But when the 12 year old let loose the whistle I'd taught him, heads came up and in they came, right on cue. But this time the energy coming across the field was low and easy...no wild and wonderful "woohoo!", the way it is when I call them.  Lucky went to the 5 year old and leaned way, way down to carefully touch her hand and then slowly walked into his grain bin with her right next to him, perfectly matching energy to each other. She held the bucket for him so he could have the first bite, and then her Grandma picked her up so she could empty the rest into Lucky's green bin hanging on the fence.

All the way through Lucky was the perfect gentleman, standing quietly to the side while his bin was filled. I never moved. She handled all of it. OH MY. I was so proud of Lucky...and proud of my little friend too. It was the perfect match for the two of them too. Both of them are Left Brain Introverts. He chose his little person just as if they'd been together for years.

Apache chose the little 3 year old girl! He came up to her and carefully, gently touched her hand. The amazing part was that he stood there and waited his turn without moving, matching himself to her tiny self and waiting while Lucky (Big Kahuna around here...alpha) took his turn. I walked the "littlest horseman" along with Apache, taking him to his shed stall, but I think he would have walked with her alone! He was attendant on her, not me. I was as neutral as I could be and still move along with them.

She held the big bowl, using all of her strength to do it, so Apache could have his first bite. Apache was so gentle with her! He took just a little nibble out of the bowl, no pushing at all, then he stepped back while I held her up so she could put it in the corner bin for him. When he stepped forward to eat, she threw her arms around his leg and gave him a kiss! He stopped eating and leaned down and touched her on the top of her head. Golly.

Willow chose the 12 year old. She came in and grabbed the edge of his jacket and led him to her spot! He was so startled, he followed. I was close to crying, I was so moved by the love and careful, respectful way my horses had interacted with those little girls. Willow made me laugh out loud! That was exactly what that ornery young man needed!

All three of them closed the gates and doors for me. They latched them too (with me checking afterwards) and then helped to coil the ropes I put up as temporary fencing. The morning couldn't have worked out better! Before they left, after lunch, we all had to go down to say goodbye to the horses! 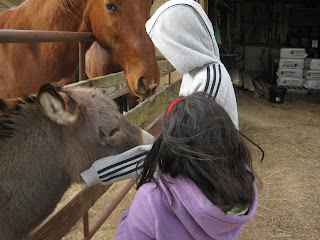 Yesterday we were writing our own movie and every "take" was a "cut and print"! I sent them all off with big smiles on their faces! It couldn't have been more perfect!

It doesn't get any better than that! Sometimes the "miracles" that happen, happen because we worked for them.

What a wonderful opportunity for those kids!!!!

Last time I saw Pat Parelli in KC, he said "Try to recruit six people...just six people, to the Savvy Club." At the time I thought "Fantastic marketing ploy!" That was the "business side of my brain" Nancy.
When I got home that evening and was outside, doing evening chores, the "horseman side of my brain" (also the artist side!) thought "It should be like this for everyone...horses and people."
So, that's what I've been doing ever since in my own quiet way.
Yesterday was my first opportunity to do something with small children. Too fun...and so easy for them and the horses. They all clicked together like puzzle pieces!
I am having way too much fun!
Nancy, smiling at the way things go

Oh, and do you know that we now have Kidz Sticks? click here:
http://shop.parellinaturalhorsetraining.com/product.jsf?productId=1109

I do know about the kids sticks. Awesome idea! I've ordered one and managed to get it in before the deadline too (bought a feather line and the longer Savvy string too, for me!).
Can't wait for it to get here.
Brilliant sale this year! And just in time for the holidays too. I bet lots and lots of people found all kinds of wonderful gifts under the tree this year!