BACK IN THE GAME 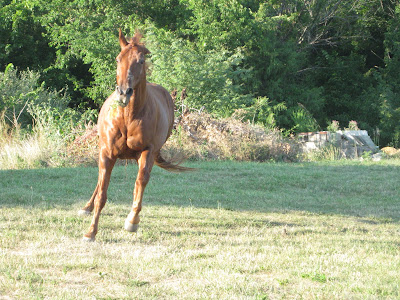 WOOHOO! I'm back. November was NANOWRIMO... National Novel Writing Month. I wrote 50,000 words (actually a bit more) in one month. It was a very funny disaster. This time (I did this three years ago too) I did have a better idea of what I wanted to accomplish, so it was a great way to push myself into launching a project that I would have continued to put off. And I always work better with a goal and some time constraint.

Weather wise we've been having exactly the kind of weather needed to continue working with Lucky and Apache with some regularity. We're all having fun with it too. Somehow, when I put my focus (translates as linear thinking) on the NANOWRIMO, it made the work/play time more fun. Lucky, especially, loves that. He can be hypersensitive to pressure. When it's "play", we both relax and accomplish more in the long run.

Hmmmmmmmm...how interesting! (look at how fit he's getting, in the picture above.) 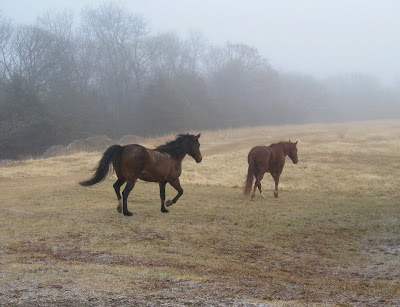 It rained all day and all night this past Saturday so things are, at last, nice and wet again. Then it froze this morning and this was the way it looked. Pretty, isn't it? I love it when there's fog and frost at the same time. It takes the detail out of the world and leaves beautiful, graphic images. It's also Apache's kind of weather. Every time he moved, it was at a trot. It's always a celebration for Apache. Never a dull moment for him!

And Lucky...oh my. I did it. I found his motivation, a way to make it feel like everything we're doing is his idea. What a difference it's making in our communication. I think it was 3/4's Parelli and 1/4 me. My timing and feel is much better now. I've been working with another horse with an entirely different horsenality than my two (Right Brain Extrovert). She's an 8 year old Arab who's pretty much just been standing around in a field most of her life. And everything is HUGE when she's taken out of her comfort zone (namely, her pasture and away from her mates). I've been taking it in teeny, tiny steps. It probably looks like paint drying to other people, but it's worked very nicely with her. She comes to me now when I get there and looks forward to the grass on the other side of the fence, there for her enjoyment and edification! Work/play with her has taken me further outside my comfort zone, making me learn more about different types of horses and how to read their body language. My tactics with any horse have changed as a result of it. Thanks Mercedes!

Back to Lucky...today I thought he was not going to be interested in playing. He was being very nonchalant, not very engaged or interested in me. Or so I thought! He was like that yesterday too, so I sat down on the mounting block and left him alone. I spent most of my time waiting for him to come to me on his own. When he did, we played for a very short time and then I released him and let him go. Well, guess that paid off.

I finished all the chores this morning, and was getting ready to go in when he came to me, put his nose on my pocket (where I keep carrot pieces) and then looked right at me. "Aren't we going to play today?" The idea of playing for tomorrow really paid off this time. When we played/worked this morning, it was all his idea. No better way to motivate a horse than that! 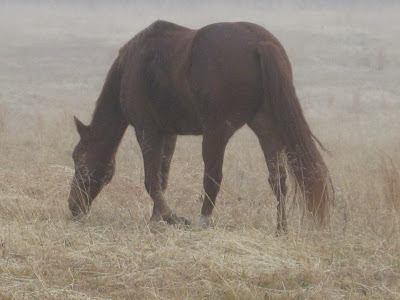 It was kind of slick out there for the first time in quite a while so I played more "small games" than the usual big field games we play. Both of us were sliding around out there.

I've been working on honing my ability to give him the idea of what game we're playing and how, using the lightest cues. The more subtle I get, the more excited he is. " Ma, you talk fluent horse now!"

Lucky is a Left Brain Introvert on the cusp Right Brain Introvert, so he slips from being pushy and alpha to being shy and introverted in his behaviors. No wonder it's been such a rocky journey for us! My skills are only just starting to catch up with him. "Horses teach humans and humans teach horses." Probably the biggest professor I've ever had!

When I left Lucky, he was standing at the gate calling to me, pushing the gate and rattling the chain. I love the way all of this is working out. Maybe he's the one who's set it up for me to do a better job! I can't wait for tomorrow.

I am, ever yours, Nancy, back in the game again

Email ThisBlogThis!Share to TwitterShare to FacebookShare to Pinterest
Newer Posts Older Posts Home
Subscribe to: Posts (Atom)
A thousand horse and none to ride! -With flowing tail, and flying mane,Wide nostrils never stretched by pain,Mouths bloodless to the bit or rein,And feet that iron never shod,And flanks unscarred by spur or rod,A thousand horse, the wild, the free,Like waves that follow o'er the sea,Came thickly thundering on,...~Lord Byron, XVII, Mazeppa, 1818