Sometimes you just never know where life is going to take you. You walk around a corner and things change in ways you would never suspect.

This morning, at 5 AM, when John went out to let the horses out of their paddock and into the pasture, there was a horse in the yard. It wasn't one of our horses. It was a big, handsome gelding bigger than Lucky (who's 15 hands 3 inches).

I knew something was up when he came flying in the door so fast after going out. Early morning time is very important to him. This time of year it's sometimes the only time of day he gets to see the horses. He usually stays out to "be" with them, just leaning on the fence or standing with them while they eat some hay. But this morning he hit the door only moments after he'd gone out.

I was up and pulling boots and a sweater on before he got to the bedroom. My heart was in my throat. I was afraid it was something bad!

Another horse? Oh my. This was going to be interesting. I know all of the neighbor's horses. They sometimes get out and come to visit. I wonder who it is this time?

I walked down to the barn with John and, sure enough, there was a big horse standing there contentedly eating from a pile of hay that John had put out for him. (A + John!) He was a big dark bay gelding, about 16 hands and some inches, stout and in his long winter coat. He turned and, very politely, walked to me and touched my hand! Oh my. I loved him already.

His eyes were very calm and soft and he was just plain happy to be here! Lots of contented sighing going on. When he came to me, he stood very patiently while I ran my hands over his great thick neck and down his back. No tension at all in this big guy. But when I picked up some skin to see if he was dehydrated, he definitely was. The skin didn't spring back the way it should. It stayed up for much too long. He needed water!

I stood there for a while with him playing FRIENDLY game with him. What lovely eyes he had. When I turned and walked through the gate, he followed. It was that easy. He knew he was safe and was content to stay a while.

I could tell he'd been here most of the night. There were piles of frozen poop everywhere in the yard. He and my herd had already settled their differences on their own. Dominance issues were determined without us, thank you very much! They turned and walked out into the pasture in a line...Lucky, Apache, Willow and our visitor coming up behind. It was funny to watch because he was, by far, the biggest physically. But Lucky was still in charge. They all seemed to be happy with the arrangement, so I didn't interfere. And everyone was thoroughly exposed to each other, so whatever was going to happen, was going to happen. It was done before we came onto the scene.

I've spent the day calling Vet's offices, calling neighbors and calling the Sheriff's department. They sent out two very nice officers, one of them a country 'boy', so he knew what to do. And then they took off up and down the road to knock on doors, trying to find the people he might belong to.

John had gone on to work, but before he went he named our gelding visitor. His barn name, at least with us, is Chaucer. Suited him too. He's a big stout fellow with a stolid air of mystery. Sounds like a "Chaucer" to me! While the officers were out hunting down neighbors, I called my farrier to see if he was in the area. He was! He came by and gave Chaucer a trim for me. Chaucer's hooves were in terriblE condition...way too long. He was tripping and obviously very uncomfortable.

He stood very nicely for us while the farrier did his job. And when he walked off, he was noticeably lighter on his feet. In the meantime one of the officers called and told me he may have found the owner! Turns out Chaucer lives up the road a mile or so from us. The lady who owned him was very surprised that his hooves had been trimmed. She'd been trying to rasp them (I did not see any evidence of that, but maybe she was embarrassed so she told me that?). I smiled and told her it was no problem at all and sent them on down the road.

Lucky and Apache were distraught that part of their herd was leaving. Bonding had happened that quickly! They cried and so did Chaucer (who's real name was Beau). Later I heard from one of the neighbors that the fences at Chaucer's home were in terrible condition. I'm not going to be surprised if he comes back for another visit. If he walked out once (and there were no scrapes or wounds, so I think he did walk out), he'll do it again.

The best part of the day was standing there while I made my calls and watching the four of them interact with each other. All Lucky had to do to direct his herd was to lift his head and flick an ear. Apache wasn't as subtle. He wanted to play! He'd put pressure on zone two, then on zone three and off they'd go, especially once Chaucer's hooves were trimmed up. My little Kahuna had big old galumpy Chaucer moving all over that field.

Willow had to go up to Chaucer just once and bite him in the chest and that was it. He recognized the lead mare, even if she is only 34 inches high and weighs just 250 pounds! Attitude...it's all in the attitude. #1 ATTITUDE, 7 KEYS TO SUCCESS , Pat Parelli. Now I know that's supposed to describe the horseman, but in this case it described the horses. 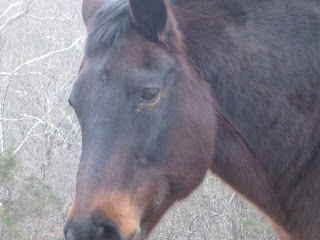 Hi Nancy, I just love that you had your farrier out to trim Chaucer's feet... Have a wonderful Christmas, hopefully no more weird things will happen!

Thank you Petra. The owner wasn't amused, but it was too late. I told her the price was on me...my gift to Chaucer.
Hopefully is right...but if he comes for a visit, I'll welcome him again. He was a wonderful horse...very sweet and willing, polite.
I know where he lives now. I drove by and stopped to visit with him over the fence. He has no water (just a frozen pond) or hay out there, so I'll be keeping an eye on things. Terrible fences too.
I think he'll be back.
I hope you have a most excellent Christmas Petra.
Nancy, smiling from my bandwagon...sigh.