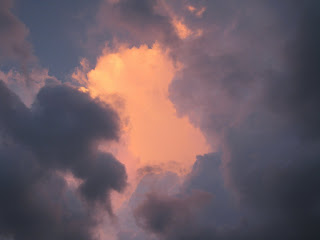 I think I found my MOJO. I won't go in to lots of detail with this posting. I'll add more tomorrow.

I knew Lucky was going to test me today. He did. After our last couple of sessions where he "won" the games (he realized that he could pull the rope out of my hands. UH OH. ), I decided to keep our games in the "small" category. All we did were little, easy things in his beloved pasture...his safe zone. He knows every bump, rock, tree and blade of grass out there. I was trying to set us up for success by keeping it super low key, low pressure. All we did were walk-abouts, grooming and hang time.

Today I spent the day, in between chores and work, obsessing about our game time tonight. I tried to visualize every place we would go, everything that might happen...all the good, the bad and the ugly. I was playing the game of Inner Horse-Man_Ship with myself. I saw him pulling back, pulling away, running over me, rearing and me dealing with it with all the arrows I had to pull out of my quiver. Good thing that "quiver" is set up to be a never ending place to tuck my lessons in to! I saw me tripping, falling, rolling, bouncing. You name it, I played it in my head backwards and forwards.

I also saw myself being light and graceful, dancing with him. You'll love this part. I even saw an orchestra along the drive and me on point, the way I was all those years ago. I was graceful and strong and he was my partner, gliding with me to the music. If you're going to visualize, then make it worth your while and VISUALIZE! We danced. I wanted a positive image in my head too. It's the ultimate goal, that dance.

Sure enough, he challenged me. It was a typical Lucky kind of challenge. He can be very subtle. He waited until I was standing on the mounting block and, when I turned to see where John and Apache were in the arena, he nudged me right off the block! Then he tried to pull out of my hands again. It wasn't really very serious, at least not yet. I didn't fall or get hurt and he didn't really put much energy in to his pulling either.

I ran to his side at 45 degrees, pulled on the lead enough to turn his head towards me and disengaged him, then ran backwards. It was an emergency dismount before I got in to the saddle. When I was sure he wasn't right brained I brought him to me and we played Friendly game for a while before we went on.

It was just the right kind of "crisis" to deal with. It wasn't huge or dangerous. But it was enough for him to understand that I had control, I was still "Boss". His head came down, he sighed and that was it! I had my 51 percent back. It's probably me seeing things that aren't really there, but it sure looked like relief on his face when he turned the reins back over to me. Sort of like " Whew! Glad you're back Boss! It was kind of scary out here."

I didn't push things. We did about 15 minutes of games in the arena, then we did our Point to Point back to the barn and paddock. There wasn't any orchestra except the one in my head playing sweet music. My Mojo was back. We weren't slidin' and glidin', turnin' and burnin' yet...but we sure were having fun!

I'm going to focus on keeping my "Inner Game" muscles intact and making them bigger and stronger too. Thanks Parelli! I love what we're doing together here.

Man, I wish my horse would listen to your 45 degree angle game, lol. My horse just digs in harder and runs like a race horse and takes off. Then I just stand there and say...ohhhh boy. We too are working on things, LOL.

Hi Janine! I think I may have been lucky (pun intended) on that one. He can be kind of a lazy horse, so even when he tries something it isn't generally too bad to handle (although he's the only horse I've come off of too, so things happen that I can't always control...yet.)
I practiced and practiced and practiced the 45% run. My husband is a very willing partmer when it comes to simulations, thank heavens. That may be why it worked too.
The best part was that I'm learning not to cry or get upset when something does occur. Big step for me. I'm much better at analizing it than I was.
Glad you stopped by again!
Nancy, out the door for chores...smiling, of course

Yeah, I just laugh now. Last night Enzo did it again! I was grazing Enzo and a huge crane flew in and scared the daylights out of Enzo. Enzo did his 360 turn and bolted like a race horse! I cannot run with that even on a 45 foot line, with a 45 angle, LOL. I waited till Enzo was done playing arabian with his tail straight up in the air and I went and got him. Silly boy! Keep up the great work!!!! I'll keep practicing on mental games for now.