IF IT AIN'T ONE THING, IT'S SOMETHING ELSE. 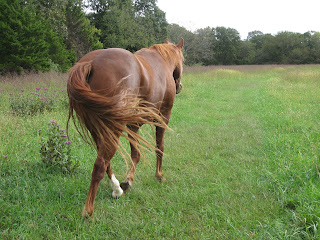 My Grandpa used to say that... "If it ain't one thing, it's something else." Then he'd smile, shake his head, check his pocket watch and get on with his day. He was a dairy farmer and, later, a truck farmer who managed to make it through the Depression with his land intact, so he was one tough cookie. He was the one who taught me not to sweat the small stuff way before anyone made that into a catchy title for a book.

Well, last night was one of those "things", or maybe a "something else". The weather was gorgeous. We're in those days of September when Kansas redeems herself. It was 75, no wind and clear as a bell. Grain time was over and it was time to set up to play. Both Lucky and Apache were ready too. They were standing there at the gate, nickering and crooning to us. I love starting our evening with that kind of reward!

John got his equipment and called Apache. I went for mine with Lucky at my shoulder. He puts his head into the halter now, ready to go, with no resistance. Most of our equipment is pretty chewed up because there used to be lots of "nummies" going on. Both of our horses have high play drives and it always came out, right from the beginning, with chewing on the leads and halters. Lucky knows what's going to happen before what happens happens, so he's motivated to get out there. No more "nummies".

We stopped long enough to brush some of the accumulated dirt of the day off, spritz a bit with bug spray since the flies are at their peak and out we went, Sideways this time. He offers it now! We went out the door and this time I added in a turn and kept going along the side of the shed. That surprised him, but he was willing. The best grass is out past the shed anyway.

The whole evening was like that. We were sailing! It was all slide and glide, easy easy. At least it was until something came crashing through the woods in the field to the north of our play area. It may have been some of the calves playing, or a deer, a tree branch breaking. Whatever it was, Lucky went in to a Right Brain panic in a nano second. BOOM! Golly that can happen fast.

Usually he just freezes. It's a jump up and then FREEZE! This time he jumped up, whirled around and took off for the back of the house. That's one of his safety zones. I tried to keep up with him while I let the rope slide through my hands but he was way too fast for me. His legs are long and he can TRUCK when he needs to. I let go. He would have pulled me off my feet. No need to go there and I knew he wasn't going to go far.

Sure enough, he stopped and turned and came back. I know I'm probably anthropomorphising here, but he sure did look like he had a sheepish grin on his face. "Sorry Boss. Won't happen again." My first thought was "Nancy! You could have done better." So I zipped that one up fast. That's negative thinking. What happened happened. Learn from it.

In that way that horses have, the tension came down pretty fast. When he went back to grazing and it was nice languid bites, I knew we were good to go. I played a bit more Friendly Game with him, then we went on with our play time. We did about 30 minutes more and I was feeling pretty good about it too. We managed to find our Mojo and to get our act together and keep on keepin' on. Time to stop while the getting was good. (I'm full of all kinds of old timey sayings today, aren't I?)

We turned back towards the barn and paddock and headed off down the drive. I'd set up the cones down the drive again so we could practice our Weaving. The plan was to Weave and then to do a couple of Figure Eight's moving into Falling Leaf. I love to flow things together. Sometimes it works like a beautiful dance now, more and more often. (Wonder if I should get out the old boom box and put some tunes into the mix?)

We'd gone down the length of the cones, back again, turned and were working on the last leg when something started to crash about in the pond, behind the cedars. (Turned out it was one of the cows, but I found out about that later.) BOOM! Lucky was off again. sigh. I thought I was prepared, that I was looking out for him and he was connected enough to trust me. But the truth of it is, it startled me too. I jumped so he jumped and that was all she wrote. Whirl and gone, just like that. He went back down the side of the house just a bit further again, then stopped, breathing hard.

He waited for me. Thank heavens we're past the evasion that used to happen. I picked up the lead and we went further away. Might as well practice our Approach and Retreat tactics. We didn't come back up to the drive until I was sure he was listening and soft enough to make it home. We went on in to the paddock where John and Apache were waiting for us. This time the sheepish look was on my face!

After everyone was in for the evening, I asked John if he would help with some simulations before we went in. He had some ideas and we wanted to try them. We took turns being the horse and figured out how to, possibly, head Lucky off at the pass when something like this happens. Of course my head went blank, obviously. I needed to get some more information tattooed on the back of my eyelids! (It's gonna get pretty crowded in there, the further I go along with this.)

I think I'm going to try running at a 45 degree angle from him next time and then use the rope as a "lever", helping to disengage his back end and swing him around. We worked and worked at it until it felt natural. Ate a late dinner too. It was almost nine by the time we went in. That's OK. The evening was gorgeous!

My breakthrough? I didn't panic. I didn't cry. Instead I was thoughtful. My heart didn't pound. In fact, I don't think my heart rate even went up...at all. I even stopped myself from berating myself.

I think I'm getting the hang of this "Don't sweat the small stuff". If it ain't one thing, it's something else. And it's all something I can learn from too.