MAY THE CIRCLE BE UNBROKEN 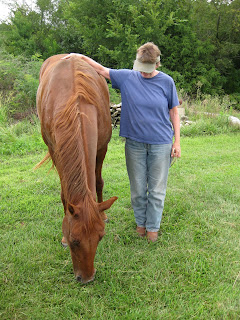 I've been reading several other BLOG's having to do with horses lately. I love the "new" forms of media and the way they keep me connected. Helps me a lot when I start to feel isolated with the issues that come up when I'm playing with Lucky. I used to say that he's a complicated horse. Now I say he's complicated like ALL horses , being the amazing sentient, emotional creatures that they are.

I love that "complicated" part too. Keeps me on my toes, forces me to focus and stay in the moment. Even better, when something doesn't go the way I thought it was going to, I'm beginning to learn the fine art of patience. Patience is the core of "being in the moment". You're beginning to see the circles in all of this, aren't you?

Several of the BLOG's I've read this week have to do with frustration and the methods those writers use to understand what's happening and why. I've read a few BLOG's having to do with horses that are not "Parelli". They're interesting, but not going in the same direction, so I probably won't go back to visit and read again. I'm looking for the SUPPORT, #7 in the Keys to Success. And, frankly, I just don't want to spend the energy and time on philosophies that don't help me along my path in a positive way.

The other "Parelli" folks (including the BLOG that is from Parelli Central where students and professionals from all over the world are writing about their paths...love that!) have been talking about the way "Parelli" is bleeding over into other parts of their lives. I'm sure of that. I was "Parelli" before I was "Parelli". I recognized Pat Parelli's statement that he's an "extreme middle of the roader" because I've been telling people that for years, especially if they asked me about my religious or political views.

Being an "extreme middle of the roader" means keeping yourself in BALANCE, #8 in the list of Qualities of a Horseman. (and a bit more of the circle is showing now...Circle being one of the Seven Games. See where I'm going?) If you are a middle of the roader, you are more open on all sides because you have to be aware of what other's are thinking and doing, which means you have to be in the moment and on your toes. (kind of like a carousel, isn't it? Circles can be fun if you see it as a Game.)

And this takes me back to Lucky and Circles. I've been having a bit of a struggle with him because his Circle is broken, or at least that's the way I've been thinking of it. In his previous home (I've back tracked to two of the barns he was at because I have a tendency to be curious about the "why's" of the things that happen. Maybe it's my way of convincing myself it isn't all my fault?) the methods used to "train" were ... ummm, don't want to put negative energy into this, but I'm at a loss for words here. They were abusive.

He was tied down and lunged to the point of exhaustion, and not just physical exhaustion either. It was done intentionally to break him mentally and emotionally. I asked and they told me, proudly too! I was told "that's the way it's always been done" and "it's the best thing you can do for him". So, I had my answers and went home. But I have to admit it was hard to keep myself in my "middle of the road" state. I had to pull off at a rest stop and get myself under control before I drove home. I couldn't see well and certainly wasn't focused on driving.

I decided to do NO circles at all until I was sure he wanted to. If we do anything, it will be partial circles in the form of Figure Eights, or Weaving or just to move from point A to point B (Point to Point) in curves. We aren't going into the Round Corral at all either. That's where his so called "training" went on.

I'm in the "middles" now with our games. Neither of us is a Beginner anymore, and we aren't anywhere near Finished. If someone else were watching us it would have been about as exciting as watching paint dry (which I like, by the way. I'm an artist. I've put in my 10,000 hours and then some of intentional practice, so learning how to use all of the different stages of drying paint in my work is just plain flat out FUN!). The last several evenings I've been focused on learning how to read all of the delicate changes that Lucky goes through. He's quite adept at hiding inside.

We're practicing lots of "silence between the notes" while we work our way through this together. I've been watching Liberty And Horse Behavior again. I think it's the central key to the whole teaching system that Pat and Linda Parelli are developing for us. If you can't learn to put yourself into the hoof prints of your horse, the rest of it is meaningless. It's just things to do. And that hooks into every list that Pat Parelli has come up with...the 8 Principals, the 8 Responsibilities, the 10 Qualities, the 7 Games and the 7 Keys.

IT'S ALL A CIRCLE! And that circle includes nearly everything I'm doing these days.

I could keep going round and round with this, connecting all the dots (remember learning the definition of a circle in math? It's an infinite number of points interconnecting. How interesting!) to make my point. But reading that would be like watching paint dry...again. (see above!)

My job now? It isn't to earn my strings anymore, at least not for now. It's to become a better partner for Lucky; to be more sensitive to his needs, emotions and the relationship. It's to work on every single one of those lists and to put OUR circle back together.

I remain ,always Nancy, yours with a lighter step...smiling.