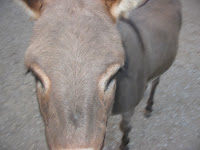 A friend called me last Sunday and asked me, at the last possible moment, to go to a local psychic fair with her. I didn't hesitate to say yes. She's in a place in her life where she needs to have her friends supporting her without question. It's a matter of loving unconditionally.

Last year, in September, she lost her younger son to a drug overdose. It's the kind of pain that leaves an indelible scar on a parent...the very worse kind of loss there is. It's unnatural to loose your child. We're supposed to check out first, not the other way around.

I'm still thinking about why I said I would go, though. Originally I went because I was worried about her. She's extremely vulnerable, the perfect target for the hacks who haven't any real ability as a psychic. She needed to have someone there to keep the creeps at bay. But when she called to ask me, she also told me that there were several other friends going. She wasn't going to be alone if I didn't go, and I was pretty sure that the others were going for the same reason; to protect her and support her in her quest to communicate with her son. So why did I really go? (I rarely give up Sunday time with John. It's sometimes the only day of the week we have together.)

I was the designated driver. She had a recent back injury and didn't feel up to driving into Topeka (a good half hour away). And I'm used to driving larger vehicles since I live on a farm and drive a big truck. I was up for that part of my role in the day. And, as a rule, I'm not a very good back seat rider. I like having the wheel in my hands.

We picked up the other ladies who were going with us, a varied group of talented, well educated professionals, all of them opinionated and outspoken. It was going to be an interesting afternoon! One of them was also the girlfriend of the young man who had OD'd. She's one of those amazing young people with a more than 4.0 grade point average, very goal oriented and focused. Sheesh...way past me at the same age!

The drive in was uneventful except for the beautiful Autumn colors in the Flint Hills. The grasses were beautiful! That alone made the trip worth while for me. I came home later in the day with all kinds of colors in my head for my next pastel!

We played the old game of telling each other our "stripper" name...a combination of our first pet's name and the street we lived on as a kid. Mine was Shotsi Lamar! Pretty descriptive, wouldn't you say? I decided that with a name like that, I specialized in tassels...lots and lots of tassels that I could make go in different directions at will. BWA HA HA HAHAHAH! I crack myself up! It's an even funnier image when I think about how far south things have gone in the past few years. At any rate, it let us start the day with laughter. And that ain't hay!

When we got there, it was being held in one of the smaller expo buildings at the fair grounds. There wasn't a large group of boothes. This was going to be manageable. We'd have time to wander around and look with no pressure to find just the right place to get a reading. There were the usual number of rock sellers and fused glass people. Most of them were retired biker types with big bellies, grey pony tails and old tattoos. Nothing unexpected there.

I listened to one pitch being made about these cheap, not well made, pendants of fused glass being sold for the over the top price of $50 each. I stood at the back of the group listening to her. If she was actually selling this stuff for that kind of obscene price, her pitch was going to be worth listening to. She had a couple of shills in the audience who demonstrated the way the pendants "protected the wearer from the evils of cell phone technology." They went on to show how these little pieces of glass would interfere with the radiation coming from the cell phone "that caused cancer and other diseases". But she made the classic mistake of leaving questions open to the rest of us watching. I couldn't resist!

As soon as she asked if there were any questions, I started in on her. I peppered her with questions about how the glass had been "programed", what kind of process was used? ( answer :They were programed with a special machine.) What kind of machine? Do you have it here? Can we watch you do it? Or do you have pictures of it being done? (answer: Oh no! It's a very expensive machine, much too expensive to bring here. And the process is secrete too! Takes allot of skill and dedication to get it done just right.) So, do you have any of the glass that hasn't been "programmed"? I'd like to see a comparison done. (answer: No. That would interfere with the power of the "programmed" glass.) Oh, so you can't wear any other kind of jewelry when you're wearing this pendant, especially if it's glass?

We went on in that direction for a few other questions. I have to admit I was having fun making her squirm and work for her money. The money wasn't going to come as easy this afternoon! But wait...there's more! In the middle of our little game of question and answer, there was a ring from a cell phone...HER CELL PHONE! When she whipped it out and said "I told you not to call me here!", I lost it. I have one of those contagious laughs. It's one of those genetic gifts that both my brothers and I have. When we laugh, most of the people around us laugh too, even when they don't know what they're laughing about.

After people got finished wiping their eyes and rearranging their themselves, we all dispersed to other booths. Every time I passed her booth after that, she gave me an evil stare. I can't imagine why?! Oh me...I had way too much fun! This was going to be a very interesting afternoon.
Posted by Nancy, smiling! at 8:50 AM