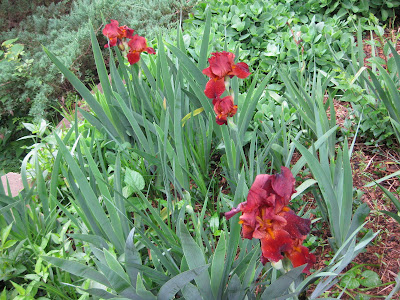 Here in Kansas, Spring is a time of weather extremes. We swing back and forth from temperatures below freezing and late snows to temperatures the next day that rise into the nineties with high humidity. There's a reason Frank Baum used a tornado as the vehicle to transport Dorothy and her little dog, Toto, to OZ. Tornadoes are a part of our landscape...like the open sky and rolling land under the prairies. We've had a standing joke in our family for years. "Kansas ain't for sissies." (Well, OK, except for my three terrified, farty dogs all of whom are jammed  up here under my desk. The air can get pretty rich when the weather gets like this!)

My first memory of a tornado was the Ruskin Height's tornado in 1957. 39 people died that night. We lived in one of those brand new sub divisions that were springing up all over the US at that time. It was just a few years after WW2 and people were having babies...lots and lots and lots of babies. Every house on our block had two or three or four kids living there, all of them in my age group. It was never hard to get a pick up baseball game going in my neighborhood. All I had to do was walk out the door with my mitt, a hand me down from my brother, my slightly dented bat (also a hand me down) and a baseball. I'd yell "Ball! Who's up?" and we'd have a tournament going in no time.

At the end of May in 1957 the weather had been perfect for days. School was almost out and we were mostly coasting to the last day. Summer was nearly here. It was hot and muggy with "heat lightening" on the horizon all afternoon. I was just six years old and nearly ready to move on to second grade.

Dinner was light and easy that evening. I think we had baked beans and hotdogs. We ate outside on our brand new patio, watching the lightening display. I was drinking my first iced tea. I felt very grown up. It had a white pile of undissolved sugar at the bottom of the glass that I couldn't wait to get to! We were between wars and anything was possible.

We had no air conditioning so the windows were open that night and the attic fan was blowing, pulling cool air through the house. It was still so hot and humid that I didn't want a sheet or blanket. My dog, Shotsi, was up on the bed squooshed up next to me and trying to pant the heat away. I wasn't very sleepy. There was a kind of tension in the air and Shotsi kept making these little whimper sounds and getting up and walking around on top of me. I loved her too much to ask her to get down.

The house was dark and everyone had gone to bed when the storms began to roll in. I was sitting in the middle of my bed, holding on to Shotsi, when my Mom came in and swooped me and Shotsi up in her arms. There was no explanation. She just came up to the bed, her face visible in the constant lightning, leaned over and picked me up with surprising strength!  And then she ran!

I remember the white muslin curtains in my bedroom blowing straight out, making these strange high pitched flapping noises. The air was flashing like the strobe lights you would see twenty years later in a Disco. When I looked over my Mom's shoulder, there was my Dad running right along next to my Mom with my brother in his arms. Out the front door we went, not bothering to close it or lock it and across the street to the neighbor's house. They had a basement. We didn't.

It was my first tornado and it was coming straight for us! It looked like a giant white snake crawling across the sky. I was riveted. I didn't know enough to be afraid.

All these years later that's the image that stands out in my mind, even though I've seen two more since and had one rip the siding off of our home and destroy my beloved maple trees. We've always been the lucky ones though. None of us have ever been hurt. I learned very early on that things were just that...things. As much fun as I have making people's homes and businesses look beautiful, selling fine art for other artists or even playing with my own environment, it's all just stuff. It's not a bad lesson to learn. 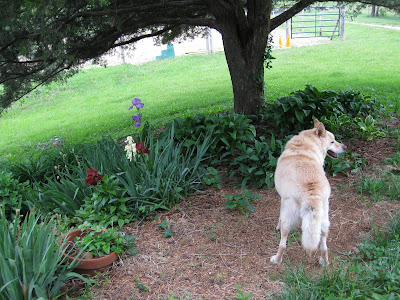 I've had some requests to write about Newman, our half coyote. I think I'll save that for another story. I can tell you that he's the one who lets us know when the real deal is coming in. When my wild child comes to me and puts his paw on my leg, sitting down in front of me with a direct look, I listen. He's the reason we spent the evening downstairs the night the tornado hit Joplin. There were two coming our way also, but they pulled up and veered around us. Again, we were some of the lucky ones.

My cousin and one of his daughters weren't. They lived in Joplin and both lost their homes. But, I should correct myself here. They WERE the lucky ones. They lived through it with no injuries. Houses, furniture and even photos can be replaced. Stuff is just stuff. Family and friends are everything!