FROZEN IN ONE PLACE... 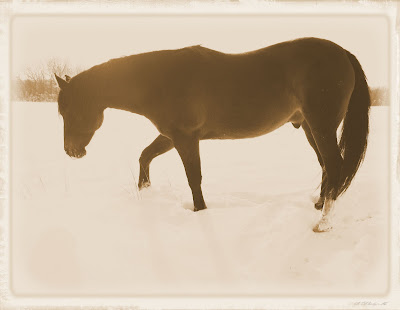 I'm suffering from brain freeze again! Aside from last night's temperatures sinking to a record breaking low of minus fifteen (pretty good excuse for "brain freeze", don't you think?) and my extreme need to drink too much hot chocolate, I'm stuck! It's a mental "stuck" rather than a physical "stuck".
I've been playing "small games" with Lucky and Apache. It's my version of what to do to keep the ball rolling when it's so cold all any of us can think of is eating and hibernating. I've been playing lots of Stick to Me with Lucky. He's been particularly needy lately, so it's more a matter of using the direction he's already going in rather than being original and edgy. He WANTS to stick to me. At one point this morning, when I was dragging yet another muck bucket full to the compost, I turned to look behind me and saw Joe (my cocker, dressed in his little blue jacket), Gypsy (my ancient lab mix dressed in her green jacket), Buddy (one of my barn cats, no coat thank you very much!) and Lucky, all lined up in a row.
Now horses and ancient dogs being who they are (me included!), it isn't hard to keep everyone on the path. No one of us really wants to have to break a new trail through the snow. It's hard underneath where it's melted and refrozen just a bit, then soft and slippery on top with the new five inches of super dry snow. So I can't really say I was the only reason they were lined up behind me. I wish I could take all the credit, but I'm cursed with  honesty . Too bad too. It really did look cool!
I took a step...they all took a step. I took three steps, they took three steps. I backed up and they backed up! It looked like were dancing the Cha-Cha out there, in the snow.  It was so cold I don't think any of the camera's would have worked anyway, but I would have loved to get that one on film! I completely forgot about the cold. I was fascinated. Back and forth we went for nearly four minutes before I realized I was letting my "monkey brain" take over again, turning fun into work. I was laughing so hard that I slipped and fell in the snow. Nearly landed with my head in the bucket too! Now wouldn't THAT have made for a funny FAIL video on Youtube? 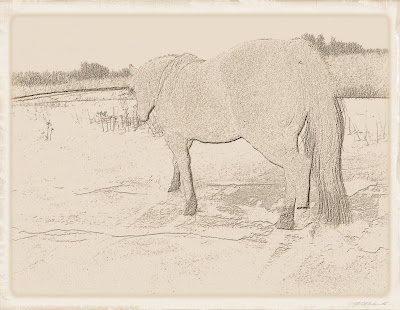 We've been playing one step versions of all the Games, when I'm cleaning and putting out hay. I've been trying to set it up so there's a reason to move. It's my way of being more particular. "Lucky, please move your left front foot back one step." and then I wait. The object of the game is to, literally, not pick up the Carrot Stick. I carry it with me everywhere, so it's usually leaning against a fence or wall or even my leg. I'm trying to learn how to "think it" without using noticeable signals. I'm successful more often than not now...maybe 50% of the time.
Yoyo is a one step back, one step forward game. Sideways is one or two steps over, sometimes only hind quarters or front. Lucky can be pretty ho hum about it, but Apache will leave his hay or grain to come play. He loves "small games". The rise in his energy is palpable! The more we play, the more engaged he is. He'll stand there, poised and ready for the next step. He licks and chews the whole time too. I would love to get inside his head, really inside, to find out just what he's thinking. And he plays the games back , coming straight to me with no pause and trying to walk right through my space. What a Wiley Coyote he is! 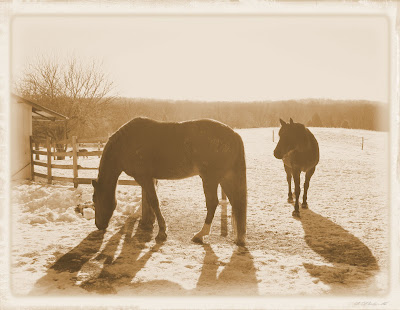 We're still playing within and through the gates too. My goal is to take the level of excitement and anxiety down to "null zone" so that when the weather is more conductive to longer sessions in the arena and round corral, it's no big deal when we're coming or going.
I guess, looking back on this post, that I'm not as "stuck" as I think I am. There's my "silver lining" for today then. I'm still moving forward, even if sideways is the best way to get there.
#2 in the Eight Principals of Horse-Man-Ship :  Don't make or teach assumptions.
I am, always yours even when my teeth are chattering...Nancy, smiling at the way things go
Posted by Nancy, smiling! at 1:40 PM